Authors, do you base your stories on people you know?

Using real people as models can lend depth and backstory to your characters–details that can take a lot of time and effort to develop. But be warned, it can introduce problems as well. 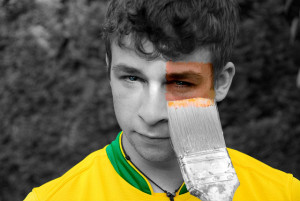 Color it up! Adding new dimensions and hues to real-life models can result in believable, complex characters.

You may have run into trouble once
you started writing because your mind sees things as they were. Real-life events are so vivid that they can overshadow the imagination. As a critique partner, creative writing teacher, and occasional editor, I can’t tell you how many times I’ve suggested changes to a story only to have the author say, “But that’s not how it really happened!”

Or you wrote about Auntie Mary but you’d just die if she read what you said about her in your story. That book won’t see the light of day until your dear Auntie Mary passes to her eternal reward. There’s a better fix other than offing you relatives or writing a memoir.

On the surface is how they look–physical features such the skinny blonde, the slick banker with sharp features who dresses in New-York black suits, the tall cowboy prefers a duster and motorcycle boots with his Stetson, or plump Auntie Mary with her silver curls and an apron tied over her floral blouse and capris. You get the picture and can think of many more examples.

The second layer to your characters consists of their mannerisms, likes, dislikes, quirks etc. Auntie Mary is always trying to feed you something. You broke up with your boyfriend, she bakes a pie. You cut your finger, you can’t leave until she makes you a lasagne. We see these personality trails through the character’s actions.

Additional deeper layers don’t show right away but can have an effect on the story. These are things like the character’s backstory and core beliefs.

The deepest and most important layer is who your characters are under pressure. Through the story’s conflicts, your characters’ beliefs come under fire. How they respond to the most intense conflict reveals elements of character that even the character may not have known.

In facing tough situations, the characters may learn something about themselves. More importantly, the reader comes to know the characters at the deepest level. This makes for an excellent story.

If you are stuck on what happened in real life, you cheat your story of those moments.

How to make fiction

To separate real life examples from the people in your story change the first layer–the outward appearance of your character. We rely so heavily on our sense of sight, that the difference between the image of the character in real life and in the story may be all you need cut the strings that bind the two together. Turn Auntie Mary into an anorexic. Change her gender, race, or national origin. Anything that will make her different in your mind from your real life Aunty Mary.

If you still think she is too recognizable to the real life version, give your character a different second layer. Auntie Mary could love to tell dirty jokes, or become a compulsive cleaner or a real mess. Or she could dress in fall colors. It doesn’t matter. What matters is that in your mind and hers (if she ever reads your work), she will not be the same as the original.

You should begin to see the character as someone other than Auntie Mary. But in many ways she will stay the same. Her core values, her smile, the way she makes the other characters feel can all remain, giving her more depth than a character dreamed up from thin air. But when she gets in a pressure situation, the response can come from you fictional character without being influenced by what Auntie Mary would do. Hopefully, you will never again be tempted to say, “That’s not how it really happened!”