The Value of Conferences

Writers seeking professional development often turn to conferences as a way to learn about the craft, meet other writers, and pitch their work to agents and publishers. But the biggest and most publicized conferences can be expensive, even more so when you factor in travel and hotel expenses.  There is another option: the local conference.  These are often hosted by state or regional writing groups or the local chapters of national groups and offer great value.

I recently attended a mini conference held by the Central Florida chapter of the Florida Writer’s Association. The sad thing was that I almost didn’t go. With just over a hundred participants, The Writer’s Nest was intimate, “cozy” in real-estate terms. When a friend invited me, my response was, “It’s not big enough to attract agents with the clout to sell my book. And who is going to lead the sessions? The same people I know from critique groups?” 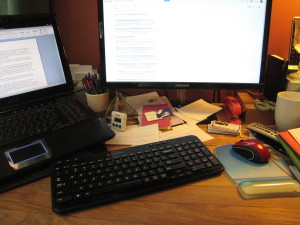 Despite what they say about a cluttered desk,
when mine looks like this it means I’m focused
on a project to the exclusion of everything else.
Right now it’s getting Rosamond Eternal out the door.

Thank goodness I checked out the program before saying no. I almost didn’t; I’ve been busy as evidenced by the state of my desk.

At this conference small were several agents who flew in from as far away as Los Angeles just to spend the day with a group of 100 plus writers. What an opportunity for these writers to not only pitch their work to agents actively building their lists, but to talk with these people who have a window on the other side of the publishing business. Several of the agents conducted sessions in which they shared their understanding of the publishing business and welcomed questions from the writers. One session had less than twenty participants and two literary agents from a well-respected Boston agency.

Then there was lunch, a healthy and delicious lunch at which the presenters (agents, publishers, social media experts, editors, and so on) mingled and dined with the participants. Talk about intimate.

As for the local talent, that’s Talent with a capital T. Sitting across the table from someone once or twice a month in critique groups is not the same as listening to their professional presentation at a conference. Some of these folks travel to national conferences to present the same material. Some are amazingly skilled writers with insight into the craft and the willingness and ability to share that with others. I humbly admit that I learned a great from the hometown prophets in Central Florida.

But I should have known. Thinking back on the first conference I ever attended, it was much the same. Held by the Space Coast Writer’s Guild, it offered only sessions, no agents, no booths, just sessions on skill building, publication, and promotion. Looking back, the presenters at that simple conference gave me the vision of my future career that I’m still using as guidance.

True, the national and international conferences draw big names. But they draw big numbers and big price tags as well. My advice–don’t discount the value of local conferences on whatever topic. There is no substitute for intimacy.