I’m feeling a lot more positive about Wattpad today. My number of reads went up to 999 last night and haven’t budged since. The lack of movement isn’t bothering me. I am finally starting to get a feel for Wattpad. Instead of a steady progression, it seems that things sometimes come to a screeching halt like a freight train rolling into a station. In a few hours or after the next post, the reads and comments start rolling again. And Thursdays are generally unpredictable.

The same with falling off the ranking list. The story has been off and on and off. If things continue as they have been, The Jaguar Key will be back on the rankings on Monday or Tuesday. I don’t know what the ranking does for the story, but it’s a nice little bit of bling on the story page. “Number 810 in Fantasy.” Sounds good. 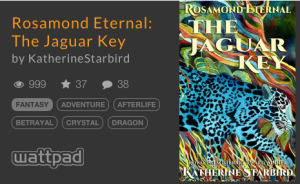 Another reason I’m feel better about Wattpad is that I’m getting more engagement with the story. New people follow me every day and a few comment on the story. The comments are not critiques in general. They are more of the nature of, “Oh, I loved it when so and so did such and such,” or “the tension is killing me.” Those kinds of comments are good feedback–it’s helpful to know what works.

Something else that’s working is that with each posting, I’m checking that the scene ends with a hook. So far, so good. Right before I sent the book to the proofreader, I checked each scene for a hook to lead into the next scene. I wasn’t thinking of something strong enough to entice a reader to pick up the story days later, but so far that hasn’t been an issue. Not a single scene has needed revision to add or strengthen its ending. As the story progresses, I’m sure there will be a few revisions, but for now, the Wattpad version is almost identical to the published version.